Not using an inhaler twice a day sounded way to good to be true. I had lived this way everyday for 10 years since being diagnosed with sarcoidosis and asthma. But after the air test results showed my home was aggravating my condition, I was willing to purchase an Air Reactor. The information about the Air Reactor gave me hope that I could have a better quality of life. The machine has now been in my home for a year and the improvement in my health is amazing. Daily use of an inhaler is a thing of the past. And for the first time in years, I made it through allergy season in Oklahoma with no sinus issues or bronchitis. My breathing was improved so much that I don't want to be away from the Air Reactor.

Hi, I am Clarence and this is my wife Janie we live in Oklahoma City. We’ve had Ray’s machine now for about two weeks and we have noticed a remarkable change in what our atmosphere is in the house as far as air quality. The dust level is down, I am breathing better, sleeping better at night, and it is just really nice to breathe good clean air for a change. I have had no headaches; before I would have headaches that sometimes they would last as long as a month so everything that just makes me happy because headaches are not very comfortable. I don’t have to dust like I used to have to dust; it has taken care a lot of the dust. I’ve had headaches too and I haven’t had any since we’ve had the machine.

Hi, my name is Heather Plude. My whole family got sick with toxic mold in 2011. We remediated our house and threw out almost everything we owned and ripped the house down to studs. It took ten and half months and my husband doing it himself and forty thousand dollars to remediate it and we moved back in February 8th, 2012 we were living there and I started to get sick again in August so I did a mold test on my house is a mold test called hertsmi-2 and it’s done through Micro metrics lab and everything over 12, somebody who is sick and sensitive like I am and my kids are shouldn’t be living in the house so when we get the test back is a 20. I knew I had to do something about it so I started looking into the Hi Tech Air machines that I had known for a couple of years but I wasn’t sick so I didn’t need them; we did the remediation so I didn’t think I will ever need them but houses can get moldy again. I think ours was just cross-contamination but we never found a water leak. What happened was, I order a machine for myself and my parents had been sick in their house and I knew it was moldy so I ordered one for them and we put it in my house. I tested and waited three months before I tested again but at the three month mark I tested the house the same way I had before and the test had gone from a twenty to a six. I was feeling better within a week I put the machines in. My parents have one in their house and they are feeling better in their house and now I can go visit my parents. My parents were sick in their house, they are not anymore and I don’t get sick when I go over there anymore. Since then I put these in my ex’s house where my kids live so I can make sure when they are over there they are safe too. We’ve done testing over there and the mold spore counts went down to almost nothing. One of the things that was very impressive to me was when we first did the test in there, it was a spore trap test that shows how much is in the air, it showed eighty percent coverage with five minutes of testing. Second time we did the same five minutes testing and it was down to three percent coverage so it just really cleaned up the air over there and I can go over there and not get sick. So, to me if you can put one of these in a building and someone is sensitive as I am cannot get sick then that means a lot.

"Our daughter had been dealing with allergy issues her whole life. We had her house tested and found out that she had a mold issue. We purchased an Air Reactor and the change was immediate. She was able to breathe and sleep better. The Air Reactor was a great purchase."

“After purchasing a Hi Tech Air Machine and running it in our house for a few months, my husband, who is very skeptical about most of these kinds of things commented one night as we were getting ready to go to sleep, "I sure do have to admit that the air in the house is cleaner and fresher smelling." He doesn’t say things like that unless there is a VERY NOTICEABLE difference!”

"Greatest thing I have seen to keep my wrestlers healthy and on the mat." 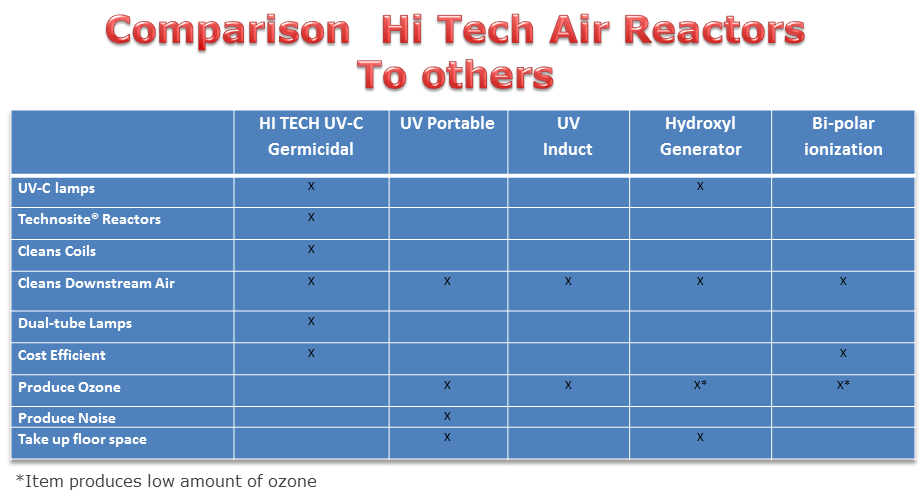